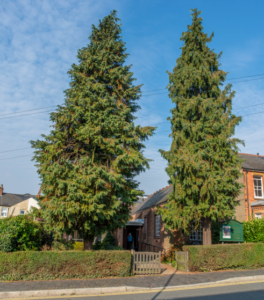 The Religious Society of Friends (as Quakers are formally known) dates its founding to 1652. (Click for general information about the Society and its history)

Records show that George Fox, the Founder of Quakerism, visited Hertfordshire in 1655 and found like-minded ‘Friends of the Truth’ established in Markyate.  By 1669, when the authorities made a survey of dissenters living in St. Albans, there were 60 Quakers ‘meeting at a hired house on Sundays and Wednesdays’.  Throughout the next ten years Quakers were imprisoned, fined and transported to the colonies for their beliefs.  It is known that at times Quakers were gaoled in St. Albans for various ‘crimes’, including failure to attend church services.

In the early 1670s persecution decreased for a while and local Quakers bought a plot of land in 1672 now accessed from Spencer Street.  Four years later, in 1676, a larger plot was purchased, which was used for some two hundred years as a Quaker burial ground.  This plot is now leased to St Albans Council and provides a pleasant public garden to the front of what used to be Police Station in Victoria Street.